A paper cowboy rides out his quarantine in Australian hotel 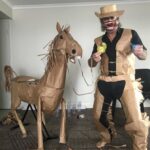 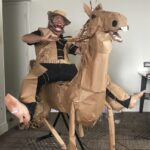 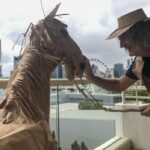 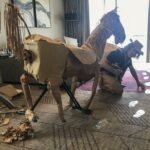 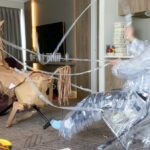 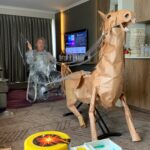 WELLINGTON, New Zealand (AP) — By Day 3 of being confined to his Australian hotel room for quarantine, David Marriott was getting bored. He’d watched a few seasons of “The Sopranos” and his eyes were getting tired from reading.

Then his lunch arrived in a brown paper bowl and he thought “Aha. That’s a hat waiting to happen.”

The paper cowboy was born.

Using the good quality paper bags his food was delivered in each day, Marriott, an art director on TV commercials, began fashioning an outfit. He added a brim to his hat, and then came the waistcoat and chaps. Next? A horse, of course.

He found an ironing board in his cupboard and tied on a desk lamp for the neck and head, creating a skeleton. Coffee pods became the eyes and nostrils. He named the horse Russell after an old dad joke: “Have you heard about the paper cowboys? They were caught and hung for rustling.”

The creative world Marriott made inside his Brisbane hotel room became more intricate by the day as he added plot lines in video clips he posted online. The Clingfilm Kid became the villain, out to steal Russell while he was sleeping.

Like Wilson from the movie “Castaway,” Marriott says Russell can also be a sounding board.

“It’s an existential conversation, quite philosophical,” he says. “Like, why are we here? What are we doing?”

And he’s given the Rydges hotel staff a laugh by asking that Russell be taken for walks.

“It’s been cheering everyone up,” he said. “The hotel staff, they’re in hospitality but they have all these guests that they can’t see or interact with.”

The story behind Marriott’s quarantine stay is more sobering. His dad Harry had a fall at his London home and was taken to a hospital, where he had an operation and was starting rehabilitation. But then he caught the coronavirus.

“I was really lucky my mom and sisters were there, and were allowed in to see him,” Marriott said. “I would Zoom with him at 3 a.m. To see him deteriorating was heartbreaking. But I was able to say goodbye and make peace.”

Marriott flew over from Australia for the funeral in what he says was a grim trip. Like other Australians returning home, he was required to quarantine at a hotel for two weeks.

Marriott said he’s been making props his whole life. Even when he was a kid he used to get in trouble for breaking his dad’s tools.

Because quarantine guests are considered potentially infectious, their food is delivered in disposable containers and plates that are discarded rather than recycled, which Marriott found a bit grating. But he said he’s barely thrown anything out since his stay began, and has only needed to order in a few extras like sticky tape and clingfilm.

And when he leaves on Saturday, he’s hoping to take Russell and his other creations with him. He said there had been interest from a film center which wants Russell in an art show.

After all, he can just fold Russell up and pop him in his bag.

Subscribe to our newsletter and don’t miss any NEWS!